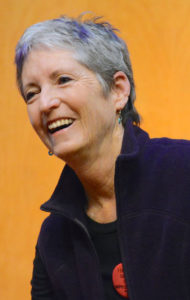 I have been a writer even longer than I have been a dancer (40+ years). I have been involved in editing and producing newsletters off and on for several decades. In my 20s I taught in the public schools, belonged to the teachers’ union, and wrote for and later edited the union’s weekly newsletter. It wasn’t much, typically just the front and back of an 8½ x14 piece of paper, but I was in charge of it, including running it off on the Gestetner press, and organizing the printouts for the building representatives to pick up and distribute.

When I left teaching, I thought I might be able to get a job in the publications department of one of the emerging tech firms in Silicon Valley. I had plenty of examples of my work but, alas, no degree in journalism, which all the businesses required. I suppose having worked for the teachers union didn’t help much either. What company would knowingly hire a union organizer?

When I became more involved in the local Israeli dance community, I wrote for and helped produce The Grapevine, a monthly newsletter. This one was 4-6 8½ x14 pieces of paper, folded in half. When the editor retired and I didn’t want to take on that job, it went to another editor who stopped publishing it after six months.

From there I began contributing to Let’s Dance! I believe the first article I wrote appeared in the April 1997 issue in conjunction with the Beginners Festival that Laila Messer, Bill Lidicker and I were organizing on behalf of the Federation. It was a piece encouraging existing dancers to not just attend the event, but to bring at least one non-dancing friend. When Gary took over in 2004, I continued to write articles as well as "filler" for Gary when he occasionally needed a little something to fill half a column. In 2005 I wrote a series about starting a dance class, advertising, planning what to teach, and nurturing it.

When I served as President of the Federation (2009-2011) I wrote a monthly column for Let’s Dance! and I used that as a platform for my ideas, dreams, complaints, and observations. Gary once suggested compiling some of my more inspirational pieces into a booklet for future dancers. That book never happened, but several of my favorites are reproduced on a page on my personal website.
Let’s Dance! magazine has a seven decade history and I am proud to be one of its editors.